February 11th will mark the 131st anniversary of the first trip of “Le ti’train péi”.

February 11th will mark the 131st anniversary of the first trip of “Le ti’train péi”. 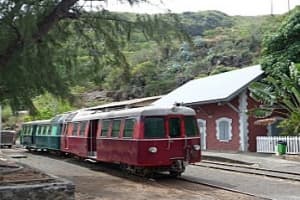 Few traces of the small train that roamed across Reunion for more than 80 years remain in the landscape of the island. Today, only one locomotive and a few wagons are carefully maintained to attest the existence of the most efficient public transportation. Yet, February 11th will mark the 131st anniversary of the first trip of “Le ti’train péi”.

Now stuck in traffic, the Reunionese people will tell you: "the Ti’train days were the good old days”. That was before the "all road" policy, at the time of the booming sugar industry in the mid nineteenth century.

In 1875, an agreement was reached between investors and policymakers to build the network. It would be divided into two sections: about 50 km between Saint Denis and Saint Benoît in the east, and about 80 km from Saint Denis to Saint Pierre. It would go through free concessions obtained for 99 years.

On February 28th, 1878, the Railway and Port Company of Reunion, the “CPR” was established and work began. After four years of work, the 126 km of railways, 41 metal bridges, 14 stone bridges, dozens of culverts, aqueducts and trenches but also the thirteen stations and 29 stops were ready for the maiden voyage. A distinctive feature of the Reunionese railway is narrow lanes. Between two rails, there is only a meter while in Europe, the width is 1.44 m.

On February 11th 1882, the first convoy shook in the general jubilation, with the “top of the crop” aboard, including Governor Pierre Etienne Cuinier, and Monseigneur Coldefy, the Bishop of Reunion who blessed the locomotive, the six wagons and the two vans.

But after 80 years of loyal service, the "Ti’train" had to cease its activities. The coastal road which connects Saint Denis Possession got the better of it.

Today you can still see a section of the metric track in la Grande Chaloupe, in the tunnel, facing the entrance to the coastal road. La Grande Chaloupe’s station also houses a small railway museum. There you can discover some restored locomotives and other historical relics. And with a little luck, you can even participate in an outing of the convoy always pampered by a handful of enthusiasts.