The 10th Sakifo Festival will be held on June 7, 8 and 9 in Ravine Blanche, Saint Pierre.

Sakifo in the starting blocks

The 10th Sakifo Festival will be held on June 7, 8 and 9 in Ravine Blanche, Saint Pierre. 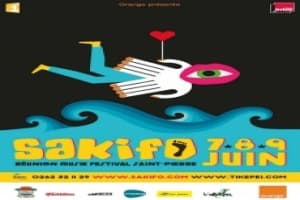 All the World music you may want to hear, but also reggae and of course music “pei” (local music), that’s what’s on the menu of Sakifo 2013 edition, still as colorful and rhythmic. The 10th Sakifo Festival will be held on June 7, 8 and 9 in Ravine Blanche, Saint Pierre. We now know the names of the artists performing. As always, the program of this significant cultural celebration is highly attractive. The small festival has undoubtedly become a large celebration after ten years of existence, and for its tenth anniversary, Sakifo has put together an outstanding program.

Starting on Friday with the Franco-Jamaican Winston McAnuff who will color his reggae-folk with accordionist Fixi’s java music. Elsewhere, you’ll find our local “maloyers” (maloya music artists) Grèn Semé who won last year’s Alain Peters prize. You’ll also listen to Ziskakan, the most internationally known group from Reunion, who will present their latest album "32 desamn" in which they return to the acoustic sounds of the original ensemble. Lo'Jo will also be on stage; as pioneers of alternative-music, this French band happily mixes sounds from everywhere, from Africa as well as Eastern Europe with, on top of that, intelligent lyrics. Fans of African music will be delighted to see the Malian griot Salif Keita, the icing on the cake being Cody Chesnut, the child prodigy of soul music with rock and hip-hop accents, La Gale (scabbies), the Swiss-Lebanese "contagious” female rapper, Menwar and his Sagai from Mauritius, Sega El for a modern village dance and even the underground electro group St Lô, a bunch of hypnotic Bretons....

The next day, let’s groove with new faces on display: Alex Sorrès who makes maloya rhyme with with Hip-Hop, the Creole way of course. Just listen to his latest album "Priyèr si priyèr" recorded with Camille Bazbaz. Another artist influenced by hip-hop is Disiz, also on stage Saturday night. No more rap or rock, no more flashy pin-ups, the singer returns to the style of his earlier days with a "clairvoyant" album steeped in hope. Another mythical Reggae band, the multicolored Californians of "Groundation". Harrison Stafford and his eight musicians have seven albums to their credit, a Rastafarian beat and jazz accents that sound authentically Jamaican. Also on stage: Benjam is the local funk band and has been on for 10 years; Belgian rock with BNRS; the psychedelic performance of South african Brother Moves On; the French soul singer Féfé; groove rock music that moves with the French group Hyphen Hyphen; MixN'Blend an electro surprise.

On Sunday, the day of the lords and of the regulars with brilliant concerts. Firstly, Cali returns with his both fragile and powerful rock. Sakifo also welcomes back the Canadian Haitian Melissa Laveaux and her brand new folk-world music album "Dying is a wild night." Christine Salem also likes the Sakifo stage and her maloya will be there again to cheer us up and ventilate our brains. Make way for the Malagasy star Joajoby and his upbeat Salegy. The festival has also invited Heymoonshaker, a Swede who has something to amaze us with his mix of beatbox and blues, as well as the charming retro Mobs from Reunion with their contemporary maloya; Mounawar and his local world blues and the French king of Hip-Hop who has justwon his second music award, Oxmo Puccino.

In short, may June come swiftly!