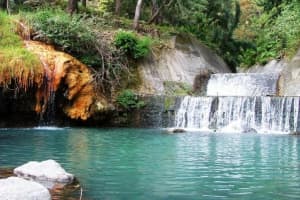 The thermal Spa Irénée Accot in Cilaos is the only health thermal centre in this part of the Indian Ocean.

The thermal baths of Salazie
But it was not always so; a few decades ago, the baths in Salazie competed with those of Cilaos. Indeed, the thermal baths helped the development of these two cirques, as soon as the nineteenth century. In Salazie, the village of Hellbourg serves as a precursor and all the VIPs of the time used to bask in this place in vogue (even a casino was built next door). Of course many diseases are healed, you can enjoy the freshness of the mountains, and the Spa even welcomes soldiers from Madagascar who come to relax.
The famous devastating cyclone of 1948 put an end to the exploitation of the Baths in Hellbourg (and put those of Cilaos on hold). Today, the ruins are a nice destination for a walk at the end of a road lined with chayote vines, beside a small stream.

The thermal baths of Cilaos
Access to the spa in Cilaos, with its curative benefits known since 1882, at an altitude of almost 4000 feet above sea level, was much more difficult. The perilous path that leads there was initially reserved for pedestrians, equestrians or notables transported in the famous "sedan chairs". The road became passable in 1932, thus disenclosing Cilaos and opening prospects for the future.
Probably discovered by maroon slaves taking refuge in Cilaos in the eighteenth century, the cirque’s springs see their first bathers around 1830. Basic basins were then dug in the bed of the stream, allowing people to soak in a natural hot water (up to 38 ° C). They could also quench their thirst in taprooms serving more or less hot water with digestive and tonic qualities.
At first, people stayed with a host (the first "guest rooms"!), then the patients are housed in wooden buildings, improved over time. A hotel was opened in 1870 and welcomed wealthy hydrotherapy patients from Saint Denis and Saint Paul, that is if they do not have a "change of air" house, ie a holiday home in the healthy coolness of the mountains.
On the eve of the twentieth century, a spa worthy of the name is finally built and opened in 1897, treating diseases from gout to hysteria, as well as chronic rheumatism. The range of care is even extended and a hydrotherapy room offers sweating, massage and Scottish showers (kind of saunas).
The reputation of the institution transcends borders, and hydrotherapy patients from Madagascar and Mauritius flock to get treatment. Unfortunately, the damage caused by the severe cyclone of 1948 will force the spa to close its doors ... for 40 years! It was not until 1988, in fact, that the current Etablissement Thermal Irénée Accot, named after its instigator, the former mayor of Cilaos, was inaugurated a few meters upstream from the ancient baths. It mainly deals today with metabolic diseases and digestive system disorders, as well as rheumatism and consequences of osteo-arthritis.