At the heart of the village of Hell-Bourg, push the gate of the Folio House to discover an authentic Creole house, a true witness of a page of history of this ancient spa town in the nineteenth century. With some information about botanics and historical anecdotes, let us guide you along the paths of the Creole garden or in the rooms of the house decorated with furniture of the period, an unforgettable experience! 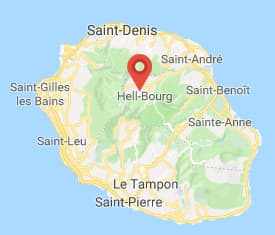 History
The Folio house and its garden, built in the XIXth century in the heart of the former spa in Hell-Bourg at an altitude of 3200 ft, is one of Reunion’s historic buildings. At the time, the village was a fashionable holiday destination. The governor used to go there on holiday, as many upper class Creole families who used to stay in stylish and charming cottages “for a change of air”. These are still standing and give us an idea of that period.
The Folio house, which bears witness to that era in Reunionese history, has been restored with an absolute respect of the aboriginal. And the upkeep is lovingly carried out at regular intervals. It offers visitors a genuine setting which recalls life in Hell-Bourg as it used to be.

The house
The house, built using the island’s hardwood renowned for being rot proof, has withstood cyclone and insect onslaughts for over a century. It has remained remarkably well-preserved. Its lambrequin decorations and geometrical designs perfectly reflect the refined taste of that period. Its architectural layout is adapted to the climate, making life in the tropic a true delight. The “Creole style” furniture, made out of sumptuous local hardwood is for the most part contemporary with the house. The 3 little outbuildings at the back of the house formerly contained the kitchen, the dining-room, the bathroom and two guest rooms.
They were part of the “Creole backyard” where the family used to spend most of the day. Today, one of the pavilions houses a little exhibition of everyday objects from that period, as well as some local handicrafts.

The garden
The garden symbolizes all the Creole art of living in those days, with its romantic kiosk, once a meeting point for lovers, and a delightful fountain with its “three graces”. Strolling along its old stone-paved paths you will be enchanted to find exotic fragrances from aromatic or medicinal plants such as: geranium, vetyver, patchouli, turmeric, citronella or allspice… Here the lush abundance of the tropical climate gives a naturally tangled aspect to the vegetation, which adds to the charm of the “Creole garden”. In an undergrowth of tree ferns and camellias grow orchids, anthuriums, ferns, nasturtium passiflora, begonia, bamboos… often in symbiosis. Enough to make any amateur gardener’s head spin.
The visit ends with the owner telling the story of his house and village with its famous runaway slaves, spa, military hospital and rich cure-patients.

Booking is requested for groups over 10 persons.
(email : maisonfolio@gmail.com)