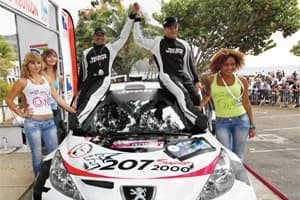 The Tour Auto 2012 ended on Sunday July 29th on the Barachois in Saint Denis.
Samuel Bellon is the winner of this 43th edition with his co-driver Christophe Tonru on their Peugeot 207. This 683 km long rally took place in four stages over three days across Reunion Island.
The competitors left Friday night from Saint Pierre for a nocturnal stage towards Bras de Pontho and Bassin Martin, then back to St. Pierre. Samuel Bellon is the winner of the evening on his Peugeot 207 S 2000.
The 2nd stage left from the harbor of St. Pierre in the direction of Saint Leu throughout Saturday to the delight of the spectators who were numerous on the mountain roadsides. Once again Samuel Bellon’s Peugeot 207 arrived first in this course.
On Saturday evening the pilots departed for the third stage in the direction of Saint Denis, with night sections. Samuel Bellon and his co-driver Christophe Tonru make a flawless performance and arrive first at this stage ranking.
After a short night, the last stage took place on Sunday morning for the last 2 sections of the rally on a loop starting from St Denis.
Only fifty pilots reach the end of this year’s edition, over a hundred competitors at the start. It will mark the consecration of Samuel Bellon and Christophe Tonru with their Peugeot 207. They are closely followed by Philippe Maître on his Renault Clio 16 S 1.6. Tony Riquebourg on his Renaut Megane Kit Car completes the podium.