Every December 20, the Reunion island celebrates the abolition of slavery.

> News on AllonsLaRéunion > Bel Air Cemetery in St. Louis, Promenade at the time of slavery.

Bel Air Cemetery in St. Louis, Promenade at the time of slavery.

Every December 20, the Reunion island celebrates the abolition of slavery. 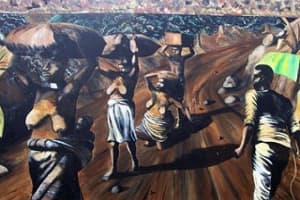 For many islanders, it is an opportunity to "craz maloya" (Maloya dance) in remembrance of ancestors. Some will also pay tribute to the Father Lafosse in Bel Air Cemetery in St. Louis.

A small cemetery with graves and modest colors. A walk like a journey through the history of southern of the Reunion island. And along the alleys, few names on the crosses. And because they are slaves who rest here, as objects of private identity. At the entrance, a clay plaque recalls that, for more than forty years, Father Lafosse preached for the liberation of black people from the parish of Saint Louis.

In 1775, the young priest was sent from Paris to the parish of South Island. Immediately, he nourrishes abolitionist convictions. During the Revolution, he took up the cause of the “Sans-culottes” and became a strong supporter of "Friends of equality and freedom."

Landowners hated him. Thanks to the support of the people and sixty slaves that he was protecting his parish, he was elected mayor of St. Louis in 1790, and then Deputy. Altercations therefore multiplied between supporters and critics of the Father Lafosse. They would lead to the great insurrection in the South in March 1798. For a month, Lafosse, Belleville and men fought before disarm.

Among insurgents arrested and sentenced to exile in India, the father Lafosse. He never went there, stopping the Seychelles before joining France and returned to St. Louis in 1802.

He resumed his fight for the abolition of slavery. He was assassinated near the sugar factory of Le Gol fifteen years later. The legend says that the slaves would then buried his body in the abandoned cemetery where they buried more or less secretly their sibliings.

Today, the tomb of Father Lafosse has become a place full of History of Slavery, flowers all year round and especially during the “Slavery abolition day” every Dec. 20.