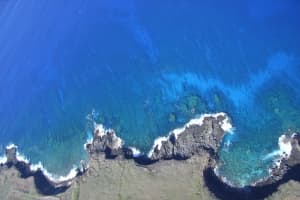 You intended to visit an island and you're on the sixth continent! Indeed, scientists have just located a new continent ten kilometers deep beneath Mauritius and the Indian Ocean. That spices up the trip!

In fact, this micro-continent is said to have existed until the end of the Cretaceous (145 million years ago), caught between Madagascar and India. Since then it’s supposed to be buried under water, broken into several pieces. And this is not a fanciful theory since this information was revealed by the very serious "Nature Geoscience" publication.

What do you do on a tropical beach? Well, some Norwegian researchers were studying grains of sand on the beaches of Mauritius and, led by Professor Trond Torsvik, covered with sunscreen for the occasion, they have recently found traces of this prehistoric continent.

In the study, they indeed found that some of these grains originated from a volcanic eruption about 9 million years ago. But that we already knew! Other grains, however, remained a mystery. Geologist Bjorn Jamtveit, from the University of Oslo, has thus proceeded to the uranium lead dating of zircons present in the said grains and found that they were even older. They would date back to the era of Neoproterozoic (660 to 684 million years ago) or even Paleoproterozoic (1.97 billion years ago). He then put forward the following hypothesis: these grains would have separated from a piece of non basaltic crust, therefore non-volcanic yet granitic, buried beneath Mauritius. The idea of a micro-continent was launched.

Called "Mauricia" - we would have indeed liked “Réunionna” better! - it is located beneath the Indian Ocean between Mauritius and Reunion islands, covered with a thick layer of lava. Millions of years ago, it was attached to Madagascar, when the Big Island drifted away from India. Hence Seychelles may be fragments of this ancient continent. And its famous granite rocks would be the vestiges of this continent. According to Professor Torsvik "maybe this continent was much larger, and many of these fragments are scattered in the ocean. "As proof, he seems to have discovered other fragments along an arc of more than 2000 km that extends from the north of Seychelles to the south of Réunion. The immersion of the different parts of the sunken continent may have begun during the Mascarene basin formation, and continued over the magmatic phenomena.

The team wishes to continue research on the basis of seismic data as digging deeper would cost a lot. With a little luck, it might finally unveil the mystery of Atlantis ... in the Indian Ocean.