According to statistics, Reunion Island has welcomed nearly 471,000 tourists in 2011

> News on AllonsLaRéunion > Tourism statistics for Reunion Island in 2011

Tourism statistics for Reunion Island in 2011

According to statistics, Reunion Island has welcomed nearly 471,000 tourists in 2011 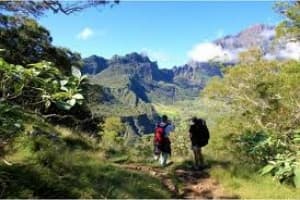 According to statistics, Reunion Island has welcomed nearly 471,000 tourists in 2011. These are honorable figures which had never been reached before. Indeed, if one compares with the previous year, one can identify an increase of 21.5%.
Another notable fact in recent years is that leisure tourism seems to be gradually catching up with tourism to visit family or friends. In other words, the number of tourists visiting Reunion Island just for fun progresses fairly reliably. However, fully half of them aims to visit relatives or friends. This trend reversal is recent and can be explained by the very intention of Reunion to make itself more attractive to the world, especially Europe.

On the other hand, the number of tourists paying for their accommodation - when accommodation takes place elsewhere than at relatives' homes - has naturally increased as a result of the rise of leisure tourism. It benefits from a significant increase of 20%. For example, the number of tourists who have chosen to rent a self-catering accommodation has increased by 40% in 2011. Meanwhile, the "holiday villages" have also received more tourists than usual, with an increase of 20%, and the lodging in residences was revised upward less significantly, with an increase of only8%.

The figures also suggest that the average period of stay of tourists is growing too: an average of 17 days in 2011 instead of 14.6 days in 2010. It is therefore logical to expect that the total expenditure during their stay should increase at the same time. This is indeed the case, and the increase was of 16% in one year, reaching 344.2 million euros in 2011. In fact, expenditure corresponding to activities like museums, gardens, excursions or such seem to progress the most, with a projection of 7%.

The only figure that does not seem to change is the proportion of tourists satisfied with their stay. Indeed, it varies very little around 90%, and Reunion Island hopes that these good results will remain constant.